Here’s an idea to remind you to relax in order to be more productive.

If there is an art to serving as President of the United States, I’ll vote for President Dwight Eisenhower. 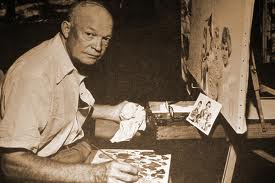 Eisenhower, an artist in residence, relaxed between meetings in the White House with his oil painting hobby that eventually created more than 260 paintings.

Eisenhower said the art hobby he started at age 58 helped him think more clearly. “You put the surface of your mind on the canvas while you work through problems in the deeper recesses of your mind,” said Eisenhower, the former five-star General who commanded the Allies in winning World War II.

Recreational pursuit in general and the “art” of leadership in particular is lost on too many of us smart-phone wielding 24/7 leaders. Today’s leaders are more apt to define the art of leadership as the ability to Tweet or Text  while driving at 70 miles hour between meetings.