Here’s an idea to focus on the best not the biggest. Reading time: 3:49

The soaring 257- foot Sequoia tree planted prominently in the CEO’s office seemed to scream to all visitors: “BEHOLD-All -Ye-Who-Enter. This is Command Central Of The Largest, The Biggest, The Tallest Company in the World in our Industry.” 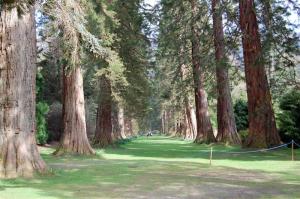 But this CEO had another idea in mind when he showcased the BIGGEST photograph in the company, of the BIGGEST tree in the world, on the BIGGEST wall in his office.

That photograph became a meaningful and memorable teaching tool to REFOCUS the company’s leadership position as the BEST in the industry not merely the biggest.

The CEO argued his best vs. biggest case most significantly –and visually– whenever he met with a candidate for a leadership position in the company.

Invariably, the candidate would see that soaring Sequoia in the photograph and say something about the thrill of working for the biggest company in the industry. Then the CEO’s teaching moment was off and running. “Our focus is on being the best not the biggest,” the CEO would then intone. END_OF_DOCUMENT_TOKEN_TO_BE_REPLACED

Here’s an idea to infuse added trust in your relationships. Reading time: 2:47

Balancing each other on the SeeSaw, the two elementary school girls personified a key leadership skill: trusting each other. Completely.

With that well-secured bond of trust, each can soar to new heights with the reciprocal action of the other.

But without that bond of trust linking these partners, one can come quickly crashing down when the other simply steps off the SeeSaw and walks away. At the wrong time.

And does the other wrong.

After all, it takes two to dance the Tango of Trust. What you give, you get. What you sow, you reap.

No wonder the most trusting leaders focus on seeing EYE-to-EYE with their trusted partners. They see EYE as an insightful acrostic standing for the three-legged stool upon which all trust sits:

Together they enjoy a high degree of predictability with each other and a strong sense of compatibility. Together they have proven their accountability and their availability. And together these two trusting partners have earned a reputation for being there  for each other 24/7. Fully connected.

END_OF_DOCUMENT_TOKEN_TO_BE_REPLACED

Here’s an idea to help you strengthen your emotional intelligence. Reading time: 3:52.

The four-star general –all 6-foot-3 and 240 pounds of him — was scared. Not of the battlefield. 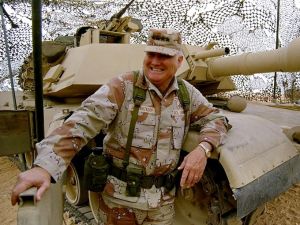 After all he led the US coalition of troops from 30 countries to victory in the Persian Gulf War in 1991.

No General Norman Schwarzkopf was scared of even more than the demands of war when he became the first US general in 46 years to win a major war.

In fact he was scared of those armed and– even  those UNARMED-who seemed less than human, especially when you looked them in the eye: They couldn’t or wouldn’t cry.

“Frankly, any man who doesn’t cry scares me a little bit,” Schwarzkopf admitted to Barbara Walters on ABC television’s 20/20 program in March 1991. “I don’t think I would like a man who was incapable of enough emotion to get tears in his eyes every now and then. That person scares me; he ‘s not a human being.”

Yes, generals cry, Schwarzkopf asserted.  General Ulysses S. Grant cried when he learned of Lincoln’s death.  General Eisenhower wiped away tears when he saw the planes take off on the eve of D-day knowing he could be sending most of them to their deaths. And the Commander-in-Chief, President Abraham Lincoln wept when he visited the injured soldiers during the Civil War.

The most effective leaders know that their tears–rooted in empathy and grounded in a well-developed emotional intelligence–are part and parcel of their humanity.

Leaders realize that expressing their humanity (crying) and connecting to the feelings and concerns of others (relationship building) is the crux of leadership.

In fact, a study at Penn State said tears in a man are a sign of honesty and another study reported in the Journal of Psychology of Men & Masculinity  found that football players who cried had higher levels of self-esteem that gave them a competitive edge on and off the field. END_OF_DOCUMENT_TOKEN_TO_BE_REPLACED

Here’s an idea to enhance your sense of interdependence. Reading time: 2:10.

You just got that big job, that promotion, that major account. And now you are feeling on top of the world. Invincible. You are the King or Queen of the corporate jungle. Hear ME roar!

Hear ME roar! Like an elephant: the largest living land animal on earth with no natural predator.

Hear ME roar! Like an elephant- a 10 to 12-ton weapon used in war during the Roman Empire.

Hear ME roar! Like an elephant  wielding a trunk with more than 50,000 muscles that can suck up to 15 quarts of water at a time.

So huge. So strong. So unconquerable. And yet so vulnerable.

The elephant and an egret  are reputed to be Mother Nature’s Odd couple. They feed off each others’ vulnerabilities that  counter-intuitively makes both stronger.