No matter. One way or another, history plays a key role in shaping our lives as author Ralph Waldo Emerson observed: “man is explicable by nothing less than his history.”

As Abraham Maslow observed history is part and parcel of each of us just as a steak that you have eaten is now part of you not, fully assimilated. “The past is not something filed away but integrated into,” Maslow writes.

The most effective visionary leaders straddle the fence of time across the bridge of history–with one eye clearly anticipating the future and one eye clearly remembering the past.

They see history as a strategic tool where the past is a crucible filled with the potential of tomorrow — not a coffin filled with the decay of yesterday. They agree with philosopher Soren Kierkegaard’s insight that “life must be lived forwards, but can only be understood backwards.”

Maybe that’s why President Harry S. Truman spoke so memorably, so meaningful, so marvelously of former presidents, it was as though he had personally known Andrew Jackson, James Polk and Abraham Lincoln, according to historian and biographer David McCullough.

As former British Prime Minister Benjamin Disraeli observed: “The more extensive a man’s knowledge of what has been done, the greater will be his power of knowing what to do.” 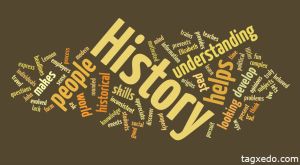 And sharing that knowledge defines the role of a leader as a teacher, according to Confucius: “If by studying the past a man learns to understand the present—only then is he fit to be a teacher.”

Leaders as teachers know the value in studying the past to better understand the present and guide their present day decisions. After all the present “takes its form from the past,” writes William Bennett, Chester Finn Jr. and John Cribb Jr. in their book  The Educated Child.

They add: “Consider this everyday example, when you make a new acquaintance, you don’t really know him until you’ve learned something of his background, where he has lived, what he has done, who has influenced him. Know these things and you understand better what makes him tick.”

Indeed, the most effective leaders are able to identify and follow their organization’s historical roots from its founding to its subsequent path through history like so many of Ariande’s threads linking the past and the present.

In that Greek myth, Ariande’s thread guided Theseus in leading his way back through the twists and turns of a labyrinth so that he could find his lover, Ariadne.

The thread of history is always woven into the cloth of tomorrow and the clothing of today. As David Gergen observes in his book Eyewitness To Power, “ Training and understanding of the past have been indispensable to the preparation of most leaders.”

An understanding of the past –history spotlighted with accuracy and highlighted with an encompassing multi-sided point of view is a powerful ammunition, according to Winston Churchill who called a good knowledge of history much like a “quiver full of arrows in a debate.”

History expands our focus beyond the “tyranny” of our everyday environment, according to Lord Acton.

Leaders know that history puts the present into perspective, according to Sophocles who wrote 2,000 years ago “one must wait until the evening to see how splendid the day has been.”

Leaders embrace the notion of Winston Churchill who said: “The further backward we look, the further forward we can see.”

Visionary leaders today are quick to pick up the threads of yesterday and weave them into a stronger, more viable tapestry of tomorrow.

Leverage history to keep your leadership thinking in mint condition.