Here’s an idea to be sensitive to points of view of others. Reading time: 2:43

Think of your organization and its various employees and departments as so many monkeys in a tree. As the CEO, you happen to be the monkey in the highest seat in the tree. 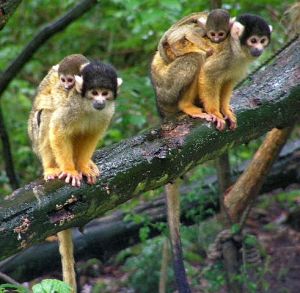 From your perch, you can look down and see other smiling monkeys. Now think of the lowest monkeys in that tree. When they look up they see anything “butt” smiling faces and they can only assume the organization stinks – at least from that perspective.

That’s how a low ranking sailor described his view of the organization aboard ship. No wonder that “the key to being a successful skipper is to see the ship through the eyes of the crew,” writes Captain D. Michael Abrashoff in his book It’s Your Ship.

Yes, you are the Monkey in the Middle. All eyes on are you, looking at you. Your role is to look down more often and imagine what they see looking up. That’s what the most effective leaders do: they look around and monkey around with meaning and perception.

“Being a boss is much like being a higher status primate in any group, the creatures beneath you in the pecking order watch every move you make and so they know a lot more about you than you know about them,” observes Robert Sutton writing in his book Good Boss, Bad Boss. 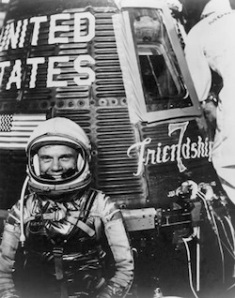 Yet, too often a leader can forget that perception is the reality, that your staff, your colleagues, your customers and particularly the general public determine their view of you and your organization   through their own frame of reference, their own personal monkey on their back.

Sometimes that playful monkey can become a burden. Just ask astronaut John Glenn. Shortly after Glenn became the first astronaut to orbit the Earth in 1962, he met President John Kennedy and the First Lady Jackie Kennedy.

But Where’s the Monkey?

Jackie introduces Glenn to her 4-year-old daughter (Caroline) as “the astronaut who went around the earth in the spaceship.” Then Glenn recalls in his Memoirs: “Caroline looked at me and then all around and then she turned back to me. Her face disappointed and said in a quavering voice, “But where’s the monkey?”

Caroline reacted normally to the facts presented to her: astronaut +spaceship = monkey. At least that’s what she recalled seeing on the black and white television screens.

During  her lifetime up to then, 30 monkeys were groomed for space flight including a rhesus monkey named Able and a squirrel monkey named Miss Baker who became the first monkeys to return to earth after space flight.

No wonder leaders are quick to get the monkey of perception off their backs so they can continue monkeying around with meaning. Aligned. And refined.

Beware of the POV of others to keep your leadership thinking in mint condition.