The team leader brought in his project on time and slightly under budget.

He drove the contractors hard to make sure the opening of the new company softball diamond would be ready for tonight’s season opener.

No wonder the team leader was feeling great as he drove up to the field a few hours before game time to do a final inspection. But then he felt like someone had kicked him in the stomach. “Bleachers! Who ordered those bleachers?”

No one knew. Finally the team leader rushed into the CEO’s office knowing he had failed to stay under budget, knowing that it will seem to the CEO and other decision makers at this billion-dollar, privately-held company that he was deliberately lying to make his numbers look good.

Now the team leader had to practice crises management 101 to save face. He had to be the first to tell the CEO that someone spent unauthorized dollars on this softball diamond project.  “I don’t know who authorized this but I will get to the bottom of this,” the team leader gushed to the CEO. “I had this under control. I swear. I will find out who did this to me.” 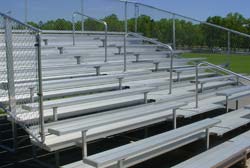 The CEO tried to calm the team leader down, reassuring him that everything would be all right. “I know who purchased those bleachers,” the CEO said. The executive fell silent and perched on his seat to figuratively pounce on whatever name the CEO said. “I did. You can’t expect family and friends to sit on the ground.”

The team leader sat back in his seat and smiled. The CEO had taught him a valuable leadership lesson. Budgets are important but so are people. The team leader did his job staying under budget on the agreed to and approved project. And the CEO did his job, focusing on the second bottom line of trust and loyalty and commitment.

That day, the team leader realized that CEO stands for much more than Chief Executive Officer. CEO could also stand for Caring Executive Officer. The most effective CEOs realize that anything they can do to make the lives of their employees and their families better the more productive their workforce and the more loyal their commitment to the company.

It was a small gesture that had great meaning to the PR guy as an employee. The CEO cares. Even about one employee.

Indeed this CEO’s sense of empathy is highly engaged. His emotional intelligence sharpened. He shares the observation of a former CEO who is also the author of Executive Warfare. David D’Alessandro writes: “Make sure you never forget that most lives involve a lot of struggle because people will not look up to you if you have no empathy for them.”

On the job or even at a softball game.

Care about others to keep your leadership thinking in mint condition.