Here is an idea to help you cope with extraordinary demands of a leader. Reading time: 5:18

The newly promoted CEO is rifling through a stack of congratulatory phone messages.

He’d just returned to his expansive and expensive new office from a press conference announcing his appointment as the leader of a $3 billion company.

His compensation had just increased 10 fold and now his span of control reached globally into eight other countries and over 18,000 employees.

But this newly minted milionaire CEO had more meaningful things to think about than dwell on his own success. And in the process he taught us all a keen leadership lesson in authenticity in his first few minutes in the BIG Chair.

“That’s the most important message of them all,” the CEO says, handing the phone message to his top public relations guy.

The PR guy scans the message figuring it must be from the Governor or a fellow CEO in the industry.  After all, the new CEO had lit up the switchboard all morning with congratulatory calls from leaders in his own company around the world.

No, the most important phone message that morning to the new CEO was simple and more personal:

“Your mother called. She’s very proud of you!”

Be real. Fitting in.

In the midst of all that hype and hoopla the new CEO taught us all how to stay grounded, to be comfortable in your own skin regardless of outside pressures or expectations. Be real. Not a big deal.

He would always be that humble guy thinking about his dad who passed away a few years earlier no matter how many bank accounts the new CEO now had; no matter how many corporate aircraft and limousines he now had at his beck and call.

Beware of the Packaging

In fact as CEO  he would continue to work hard maintaining his authenticity.  As the years rolled by he tried to keep it real, especially in meeting other CEOs in major companies.  Some of those CEOs he met were more audacious than authentic, often strutting their power and prestige for more show than tell. The CEO observed:

“I’ve met just about every CEO who runs a big company.
The ones I’m most impressed with do not seem packaged.
But they have this sense of peace, this self-awareness,
that says, “I understand who I am.” 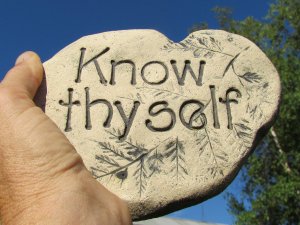 That’s because this CEO is true to himself. As Socrates taught: Know Thyself.” Or Shakespeare wrote: “To thine own self be true.”

Be comfortable in your own skin. Scrap the pretense of power. Assume the presence of your personal power, your authentic self.

As Bill George observed in his book, Authentic Leadership: Rediscovering the Secrets to Creating Lasting Value, authentic leaders  “establish long-term, meaningful relationships and have the self-discipline to get results. They know who they are.”

How do you develop your authenticity? Develop your “own leadership style, consistent with your own personality and character,” George adds.

With your authentic self you develop a can-do, will-do sense of achievement toward your purpose without bowing to external pressures.

And with your authentic self, you act more naturally, more personally, more proactively — not more politically, not more arrogantly and not more defensively.

Maybe that’s why Peter the Great, the Czar of Russia, assigned himself the lowest rank in the army at age 13 even though he could have made himself commander-in-chief. Peter the Great had the authenticity to earn his rank not command it.

He worked with the other troops rather than ruling over them. He kept it real, sleeping, eating and marching with other. He kept it real, touring Europe as a common soldier rather than as as the first Russian Czar to leave his country. In keeping it real, he got to know others  because he first knew himself.

Indeed all authentic leaders focus on staying grounded no matter how high they fly on Millionaire’s Row. Just ask their Moms.

Know yourself to keep your leadership thinking in mint condition.