Here’s an idea to focus more on the positive in negative situations. Reading time: 3:45. 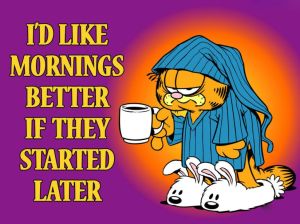 Beware of the ANTs (Automatically Negative Thoughts) writes Daniel Amen in his book  Change your Brain, Change Your Body.

Like ants invading a kitchen, a few ants ain’t bad “but when you have an infestation, it spoils your day.”

No wonder the most effective leaders stomp out the ANTs. After all that magnet of misery –negative thinking – will pull you down. Consider the overwhelming odds:

In The Ten Commandments “No” or “Not” is mentioned 12 times compared to only two positive commands. And twice as many people will be told about a negative experience as a positive experience, according to government customer service survey.

It’s too easy to complain, to chastise, to put yourself down. It’s too easy to accept the ANTs crawling all over you—the Automatically Negative Thoughts –like Garfield does in the comic strip:

“Do you know where I’m residing? Garfield asks.
“Bored city, that’s where.
But not for long,
with a positive mental attitude, I can whip it.
I think I’ll make a lateral move — to Self Pity.”

Another comic-strip character adds to the Pity Party. Ziggy says: “Every time opportunity knocks, I’m out in the back taking out the garbage.”

For example the New England Journal of Medicine reported that less than half would accept a risky treatment for lung cancer if told they would have a 32 percent chance of dying.

No wonder the most effective leaders embrace the notion that even though scientists can produce absolute zero temperature (-459 degrees) there is no limitation on how hot something can get as long as enough energy is available.

That’s what leaders do. They create the energy for positive outcomes.

And stomp out the ANTs.

Stay away from the negative to keep your leadership thinking in mint condition.