Here’s an idea to enhance your integrity. Reading time: 2:39

The Greek sculptor diligently carved the back of a statue’s head.

No matter that virtually no one would ever see his handi-work.

Especially on 40-foot tall statue placed against a wall.

A bystander chided Phidias for working so hard on his Athena that would be positioned inside the Parthenon in Athens.

“I will know,” Phidias stated sternly.

Leaders always know. No matter who’s watching. Or not.

Cut one of the arms of a starfish and a new arm will grow in its place. Leaders are like holograms. Leaders know you can’t cut away their wholeness.

Cut a hologram in pieces and each piece still retains the whole picture, no matter how many pieces you cut from the original. The whole image remains intact on each of the smaller pieces. Leaders know you can’t cut away its wholeness.

Cut a starfish into pieces and any pieces that contain part of its central disc will develop into a new starfish. Leaders know you can’t cut away its wholeness.

Cut a magnet in half and you magnify more than weaken its power. You get two equally powerful magnets. Leaders know you can’t cut away its wholeness. 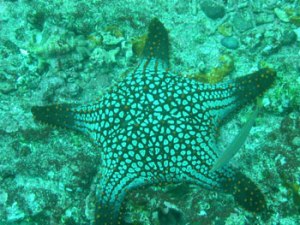 That’s why the leader in pro golf legend Bobby Jones remained whole and maintained his integrity, even though no one else would have known.

He penalized himself a stroke when his ball moved slightly before he addressed it. The penalty forced him into a tie for the US Open championship and then he lost in a playoff.

That’s why the leader in another professional golfer –Tom Kite–remained whole and maintained his integrity, even though no one else would have known. In the 1978 Hall of Fame Classic at Pinehurst, Kite penalized himself one stroke for moving the ball slightly before he addressed it. He finished second by a stroke.

That’s why the leader in another golf pro –Babe Didrikson –remained whole and maintained her integrity, even though no one else would have known. She penalized herself two strokes for playing the wrong ball and lost the tournament.

And that’s why in 2005, tennis pro –Andy Roddick- remained whole and maintained his integrity, even though no one else would have known. He could have accepted the umpire’s decision that his opponent’s serve was out of bounds in the Italia Masters Tournament in Rome.  But Roddick knew better. He objected to the umpire’s favorable call. Instead of winning the point, Roddick lost not only that point but eventually the match.

Leaders know. They know themselves. They know how to stay whole –and holy–especially when no one’s in sight.

Maintain integrity to keep your leadership thinking in mint condition.