Here’s an idea to better cope with critics of your writing. Reading time:3:11

You worked hard writing a report. Now instead of a “thank you” or at least basking in the glow of an appreciative glance, your client/boss/team begin figuratively shooting your document full of holes, their red pens bleeding all over your margins in the wake of an editing eruption. On steroids. 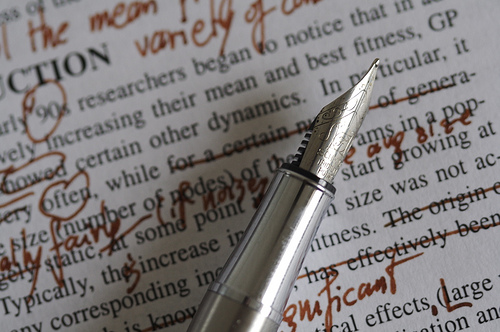 Your face is getting even redder as your blood pressure soars and you realize the critiques seem concerned more about your writing style than your thought process.

You’re a wounded writer. And sometimes, leaders have to grin and bear it, especially if the critic is your customer –or your boss. Sometimes you have to swallow your pride for the good of the project.

Relax. Take a deep breath. And smile when you remember the following apocryphal story that has soothed the editing lacerations of many wounded writers.

Ben Franklin, a prolific author, tells of a business owner who wanted a sign painted that said: John Thompson, Hatter, Makes and Sells Hats for Ready Money. A picture of a hat would accompany that copy. 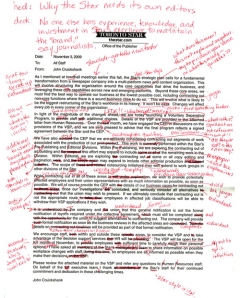 But first, Mr. Thompson wanted to get the opinion of a few friends. Every time he showed the draft of the sign, someone would excise another word. Finally the sign was reduced to Thompson’s name and a picture of the hat.

The moral of Franklin’s story: get over it. If you write for public consumption, you will have more editors than readers, at least initially. Accept it. After all, it’s a lot easier to be an editor than an author. It’s lot easier to critique than originate. And humans always follow the path of least resistance. No matter how skilled the writer.

But that very situation when all is in flux is exactly the point when leaders lead.  Their writing galvanizes people and ideas. Their thinking on paper gains attention and retention more than contention and rejection.

Imagine how frustrated Thomas Jefferson must have felt after  his editors –fellow Congressmen— cut out more than 25% of it.  Jefferson said privately they had “mangled” his draft. He called their changes “mutilations.” His pride was bruised. But Jefferson “is not known to have uttered a word in protest or in defense of what he had written,” according to historian David McCullough writing in his biography of John Adams.

No wonder. Leaders grin and bear it and in the process invite others to invest themselves in the solution rather than divest themselves of any responsibility. Leaders do more than author. They authorize. Engagement.

Grin & bear your critics to keep your leadership thinking in mint condition.