Here’s an idea to help you maintain control in a conflict. Reading time: 2:11.

I always smile when I think of the scene in  Star Trek the Motion Picture  where Spock and Dr. McCoy are reunited on the starship for the first time in years.   McCoy — the affable people-oriented physician —  sniffs at Spock — the cold, aloof, analytical half human science officer: “You are as warm as ever and you haven’t changed.” 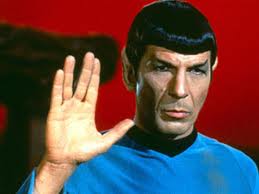 And Spock, his voice dripping with equal sarcasm, retorts: “Nor have you changed, doctor, as your continued predilection for irrelevancy demonstrates.”

Feuding like that between McCoy and Spock — born in personality differences and bred in a high-stress work environments, is bound to happen in any organization whenever and wherever highly intelligent, ambitious, opinionated people come together. The key for effective leaders is knowing how to deflect and defuse accusatory language.

That’s why the most effective leaders I have known get off their “buts!!!” They conquer conflict with something more than the standard “Yes….but” mantra. They turn their ‘buts” into ‘ands.”

INSTEAD of “but-ing” in— defending their point of view with a phrase that rolls off their tongue virtually at will–“Yes, but….: They respond: “Yes, AND.”

INSTEAD of “but-ing” in —and challenging others directly with a “But, what it really means is…,”—- they say diplomatically : “AND, it could also mean.”

INSTEAD of “but-ing” in –and flatly rejecting another’s opinion with a “You’re wrong,” they say—“You’re probably right, from your point of view. AND there might be another way to look at this that would make sense to both of us.

INSTEAD of “but-ing” in –and defending yourself with a phrase like “You don’t understand,”— the most effective leaders take the sting out of that charge by saying, “AND help me to better understand your concerns.”

Make no ‘buts’ about it.

Make no buts about it to keep your leadership thinking in mint condition.

You may also like these previous Leadership Mints on Conflict Management: