Here’s an idea to help you keep your commitments. Reading time: 4:11

I was shocked when I walked into his beautiful condominium in Pompano Beach, Florida.

In the corner of the his beautifully appointed living room were two huge tanks of oxygen. Six foot tall tanks.

And there’s my conundrum: how do you run a marathon if you need oxygen tanks just to breathe?

Back then I was a reporter for The Miami Herald, researching a story on an 80-year-old planning to run a marathon.

That turned out to be Tom, the wiry guy who at 80 was more than three times older than I was at the time. Tom said he had a lung disease that necessitated those oxygen tanks in his home.

When Tom told me he was training to  run a 26-mile,385-yard  marathon, I laughed. And then–about a year later– I cried.

I cried tears of joy and amazement as I ran with Tom as he finished his marathon. Tom taught me a critical leadership skill: the power of commitment quite literally step by step, day in and day out.

Thanks in part to Tom’s inspiration, I had finished my first marathon earlier in just over three hours  And now two and half hours later, Tom was still out on the course periodically walking and slowly running.    I went back out on the course and ran with him the last mile. He was smiling. I was crying.

He was smiling. I was crying.

I was crying because Tom had  persevered beyond so many obstacles. Beyond illness. Beyond old age. Beyond dire predictions of his own death.

Before embarking on his marathon training,  one  doctor  gave him six months to live.  Tom went on to live for three more years.

Other doctors said there was an outside chance that if Tom exercised (running)  his lungs he might beat the odds but there was still a chance the exercise might also kill him more quickly.

Given that prognosis, I had to find out what made Tom run. Why would he chance running a marathon?  That first day we met in his oxygen-tank- furnished living room,  he told me a leadership principle I will never forget, something that has inspired me ever since.

I Want to Take Charge 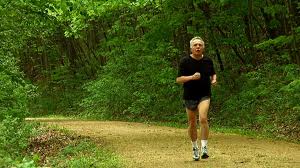 Tom said:  “All my life people have been telling me what do to. Now they are telling me how I am going to die. I want to take charge of whatever life I have left.”

Tom reminded me of Santiago, the Old Man in Ernest Hemingway’s   The Old Man and the Sea. He persistently ventured out on a small boat to fish in the ocean even though he hadn’t’ caught any fish for 84 previous days.

“Man may be defeated but not destroyed,” says Santiago.  That’s Tom.

I’m thinking of Tom today –on the 116th running of the Boston Marathon. An 83-year-old is the oldest running in today’s marathon.

Chances are that octogenarian born the same year of the stock market crash in 1929 is running with the same conviction that Tom demonstrated not to go gentle into that good night as  poet Dylan Thomas urged.

“Old age should burn and rage
at the close of day.
Rage, rage against the dying of the light.”

Tom raged against the dying light. He rode his own two feet and his ever-widening smile mile after mile to the finish line.

And for me,  watching him cross that finish line was enough to take MY breath away. Now I know who those oxygen tanks were for.

Persist especially when time is running out to keep your leadership thinking in mint condition.