Here’s an idea to help you see more than is evident. Reading time: 3:28.

“Grrrrrrrr!”  The guttural sound exploded out of the karate expert’s throat like the blast of a bullet as he smashed a pile of cement blocks with his hand.  The grunt– “Grrrrrr!”–sounded like the robed warrior was either trying to stimulate his courage or intimidate his competition. 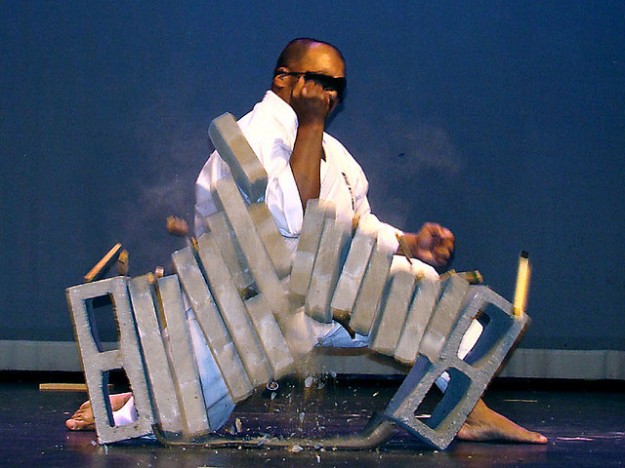 But discerning leaders know that grunting karate expert was in fact doing something more extraordinary than ordinary intimidation or grandstanding.

After all,  the body has more strength when the lungs are devoid of air.  So his Grunt Work of another kind bolstered his mighty blow that shattered the stack of cement blocks in stunning fashion.

How counter intuitive! It seems to me that your body would be stronger with life-sustaining air in the lungs.

But then again, the most effective leaders I have known are counter-intuitive.   In fact, their insight is more critical than their sight.

And with that insight, counter-intuitive leaders discern more meaning into the actions of others than simply what they see.

To strengthen your own Grunt Work capability — to sharpen your own leadership thinking beyond the ordinary–  let’s take a look at a few other counter intuitive initiatives.

Counter Intuitively Eskimos Light a Fire Inside an Igloo

For example, counter-intuitive leaders like the Eskimos light a fire inside an igloo to strengthen it, not to melt it.  The heat creates a moisture that is driven outside where it freezes and insulates. Counter-intuitively, you can sit inside an igloo without a coat on when it is 50 below zero outside. No wonder leaders counter intuitively discard their preconceived notions and leverage their Grunt Work.

Discard your preconceived notions to keep your leadership thinking in mint condition.