Here’s an idea to maintain your poise in the face of frustration. Reading time: 3:32

The bees are swarming. What do you do? Silly question isn’t it? You run for cover of course. Unless you’re an extremely experienced bee keeper. Many of them not only remain poised but also uncovered.

DON'T TRY THIS AT HOME: Experienced (read stung many times before) bee keeper is poised under pressure.

Amazing. A small percentage of beekeepers actually wear no protective clothing on their bare arms or faces.  Those most vulnerable beekeepers exhibit a key leadership skill: calm and confident expertise in a crisis.

They’ve learned how to adapt. They’ve been stung so many times they are seemingly immune to the pain. In fact, I wonder if poet Rudyard Kipling had beekeepers in mind when he wrote his poem IF:

If you can keep your head when all about you
Are losing theirs and blaming it on you;
If you can trust yourself when all men doubt you,
But make allowance for their doubting too:
… Yours is the Earth and everything that’s in it,
And–which is more–you’ll be a Man, my son!

Or a Woman, my daughter. Poise is power. In fact that ability to find sanctuary, to remain calm, poised, and collected when the world around you is spinning out of control is a critical leadership skill that strengthens your performance.

Consider a famous bee keeper of sorts: Joe Torre, former manager of the New York Yankees. He earned a reputation as an unflappable leader who kept his head when others around him were losing theirs.  “Be intense but not tense,”observed  Torre, who snapped the Yankee’s 18-year barring from the World Series throne room and then went on to win the World Series in four of next five years.  The more tense the situation got the calmer Torre got and the better his teams performed under pressure. You got the feeling he didn’t need to wear protective clothing around the bees swarming in his hive known as the New York media pressure cooker.

fantasize about getting off the train of our hectic lives, much like that harried executive in one of my favorite Twilight Zone television episodes. He falls asleep commuting on a train from Manhattan to Connecticut . He awakes as the train is pulling into Willoughby.

Taking Refuge in Your Own Personal Real Life Willoughby

The executive rubs his eyes, looks out the train window and sees a story-book scene of well-dressed, attractive women carrying parasols strolling slowly near a gazebo and young boys carrying stick fishing polls. Confused, the executive questions the train conductor, what is this place? 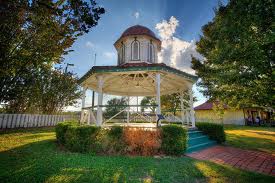 Gazebo in an idyllic park setting in your own personal Willoughby.

And the train conductor responds: “It ‘s a place where a man can slow down to a walk and live his life to full measure.” (Of course in the TV show you have to jump off the train and commit suicide to get to this imaginative place.)

But in real life the most effective leaders I know have a REAL Willoughby in their lives :

Today’s ImproveMINT
Parlay your power of poise to keep your leadership thinking in mint condition.