Here’s an idea to more fully value the quiet leaders in your organization. Reading time: 3:02.

The human resources vice president fumed during talent review meetings when his colleagues carped about the introverted tendencies of potential leaders in the organization.

He felt like flinging a raw egg at someone.

Then he thought of something more convincing: why not throw a dozen eggs at those whiners.  And so at the next meeting of the talent review committee he let his colleagues have it.

They all ended up with egg all over the faces after he made his case for the value of the QUIET leader in serving as QUITE  the leader. And in the process taught me a lesson in leadership that I will never forget.

“Bland can be grand,” beamed the vice president, opening a carton of eggs to showcase  six colored “Easter eggs” and 6 white shelled eggs.

“Of course we all want more of these kinds of leaders in our company,” said the vice president, pointing to the colored eggs. “So how do we get more of those vibrant, creative, colorful eggs in our corporate basket? With these. He pointed to the bland white shelled eggs.

Bland Leaders Serve as the Catalyst for a Spectacular Performance 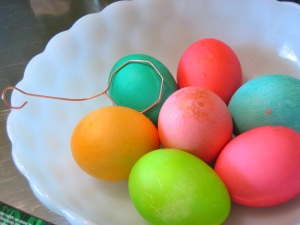 It is precisely BECAUSE the white egg is bland that it can lead  the positively charged vinegar to interact with the negatively charged dye. That interaction gives birth to a plethora of spectacular colors — GRAND colors that we celebrate at Easter.

“Without these bland eggs we would not have so many grand eggs in our company,” deadpanned the vice president of human resources. “We need the eggs. No matter what color they come in. Even no color.”

Ever since I first learned of this vice president’s eggs coloring metaphor, coloring eggs at Easter time took on a more enriching ritual. It wasn’t so much that I want painting over the eggs but allowing the characters at the opposite ends of the spectrum — acid in the vinegar and alkaline in the dye– to bring the best out in each other. Together. Primarily because of our differences.

The vice president of human resources focus on egg-selence in relationships and teamwork got me thinking about that final scene in Woody Allen’s movie Annie Hall.

Crazy Relationships Still  Rewarding  ‘Because We Need the Eggs’

In a voice over as the narrator, Woody Allen tells the story of a guy talking to a psychiatrist:

“Doc, my brother’s crazy. He thinks he’s a chicken.”
Doctor replies: “Well, why don’t you turn him in?”
Guy says: “I would but I need the eggs.”

Then Woody says in a voice over: “I guess that’s pretty much how I feel about relationships. You know they are totally irrational and crazy and absurd. But I guess we keep going through it because most of us need the eggs.”

And so do we -in business, in government, in non profits– need  the eggs.  All the eggs. Even those with no color because bland can be grand.

Value your quiet leaders as quite the leaders to keep your leadership thinking in mint condition.