James Michener authored more than 40 books. “Which one of  your books was your favorite?” Michener was often asked. His answer was always the same:  “The next one.” 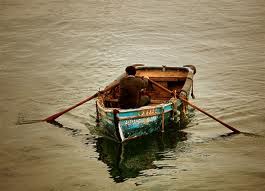 Likewise the most effective leaders I’ve known are more apt to look forward than celebrate or bemoan the past. They are much like Santiago, the old man in Ernest Hemingway’s classic : The Old Man and the Sea.” It didn’t matter than he had not caught a fish in 84 days. On the 85th day he not only went out fishing but ventured father out into sea than ever before.

For leaders like Santiago, it’s always the next problem to solve, the next project to plan and execute, the next hill to climb. It’s more about the pursuit than the capture, more about mining than the minting of the proverbial gold.  No wonder that most pioneers who raced across the country in the 1849 Gold Rush said that even if they found all the riches they would ever need, they would continue to pan for gold.

After all,   it is the PURSUIT of happiness not the happiness itself that our forefathers called out in the Declaration of Independence: “ in the pursuit of life, liberty and happiness.”

That’s why most effective leaders are always in pursuit. They are on the go, moving toward a goal. They don’t linger long before venturing farther down their road of success. They are sole searching, wearing out their shoe leather long before they wear out their fortitude.  “Man is not made for defeat,” Santiago says. “Man can be destroyed but not defeated.”  Not de-feeted, no matter how paralyzed physically or psychologically.

The most effective leaders I know brandish their Peripatetic Posture with a deep seated personal pride. In fact  Oliver Wendell Holmes, Jr., the former Supreme Court justice noted that the greatest thing in the world wasn’t so much where we stood but in what direction we were moving. He said the key to happiness is to keep on moving and “not lie at anchor” but to keep sailing “sometimes with the wind and sometimes against it, but we must sail and not drift.”

Action is the traction to climb Mount Happiness. Maybe that’s why a chairman of a large corporation has a sign on his desk that reads: “A desk is a dangerous place from which to watch the world.” When you stay in motion. you are more apt to take more control over emotions. At least that’s what William James, the father of psychology once said: “I don’t sing because I am happy. I am happy because I sing.”  Or fish for a lot more than fish.

Today’s ImproveMINT
Keep on keeping on to keep your
your leadership thinking in mint condition.