Here are few ideas to make the opening of your next speech more visually compelling. Reading time: 4:57

The president called a special 7 a.m. meeting of all 400 managers in his company one Sunday morning —the last day of a three-day conference at a resort.

Everyone grumbled at having to get up that early because of a venue scheduling conflict.  At 6:59 a.m. the huge hotel ballroom was filled. But the president looked like a no-show.

Finally at exactly 7 am the president walked on stage. In his bathrobe!

Waving a cup of coffee in his hand, he said: “Geez, who scheduled this early morning meeting anyway?” The crowd laughed. They howled even louder when the president disrobed.

He stood in full business attire as he approached the  lectern and began his speech.

The bathrobe-disrobing president tapped into what his audience was feeling at that moment. He connected with them, personally. He demonstrated his emotional intelligence.

And they were now more attentive to his message. Even at 7 in the morning on a normal day off for most employees.

How can  you create and deliver as compelling an opening in your next speech?  Here are six more examples of how leaders have captured an audience’s attention from the start— sometimes even before uttering the  first word.

A vice president began speaking in French to her English-speaking audience. She  stopped suddenly and said in fluent English: “No wonder our customers are confused. No wonder our sales are down. We’re not speaking the customer’s language. They can’t understand why they should be buying from us. Today we are going to learn how to speak their language.”

An executive pulled out a stack of money. She fanned the fifty $20 bills like a knowing poker player. Real money.  Then she walked over to a window and tossed the fifty $20 bills out the window. As the bills floated to the street five floors below, she looked at her audience and said: “I just threw out $1,000 but that pales when I think of all the money that we are throwing out of our collective windows every single day.” 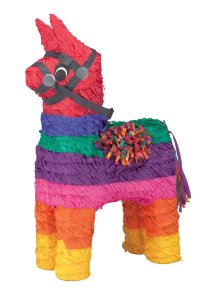 A vice president began flailing away at a pinata with a baseball bat. After the cascade of candy flooded the floor, he said:

“I feel a little like this pinata. Everybody seems to be hitting me up for more resources. I feel battered.  Our resources are depleting.”

The vice president said:  “Ladies and Gentlemen, I have found the secret to earning more sales  for our company and increased commissions for you.  I can tell you where it is. It is taped to the bottom of your chairs.

“Would you all please stand and look for that secret taped to the bottom of your chairs? When you have finished then please sit down and I will tell you more about this secret to success.”

(Each person in the audience bent over and
found $20 bill attached to the
bottom of the chair they were sitting on).

They all were delighted. Then the vice president said: “The secret to that kind of financial success is clear to me. In fact you just demonstrated it. In order to make money, you have to get up off your chair. You have to take action.”

A speaker began a presentation by saying maybe we are looking the wrong way at the right thing. We have the right resources but maybe we need to look at them this way. He walked up to the marker board and wrote: SDRAWKCAB.

“Does anybody know what that is? It is simply a new way of looking at the same resources we have had,” the speaker observed. “Let’s look at it backwards or (pointing to the marker board) SDRAWKCAB. Maybe the answer is right in front of us. We just need to look at it from a different perspective.” Of course he was pointing to the word “Backwards” spelled (sdrawkcab) backwards.

“Yes, that is the face value but now examine the coins closely and you will see they are dated 1924, ” the vice president observed. “That makes them worth $1,078 not 68 cents. We too are sitting on a treasure chest of valuable information, more valuable than we see at face value.”

Indeed the most effective leaders speak with more than their words. They stage their message with a flair that answers the plea of all audiences as short story writer Guy de Maupassant once observed to:

“Comfort me.
Amuse me.
Touch me.
Make me Dream.
Make me Laugh.
Make me Weep.
Make me Shudder.
Make me Think.”

Even at 7 am on Sunday morning. In your bathrobe!

Connect visually before speaking  to keep your leadership skills in mint condition.

4 thoughts on “Public Speaking in a Bathrobe and Beyond”