Here’s an idea to help you better cope with a perceived personal crisis. Reading time: 3:57.

Dreading your 40th birthday? I sure did.  But I survived and even thrived because I practiced one of the most critical leadership skills:  framing the problem or issue so you can better solve it. 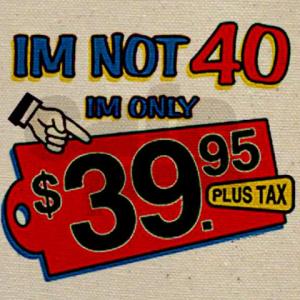 Even if you’ve already turned the BIG 4-0, this framing concept can work for you.

Let’s examine the problem of turning 40 as initially presented: Sure, I was getting older. But, could I also be getting stronger? You decide.  Here’s how I framed the issue.

Jules Verne helped me see deeper into the center of me.

There on page 117 in his book From the Earth to the Moon,  Jules Verne is describing  the first manned moon launching 104 years before Neil Armstrong.

You guessed it. At the count of 40, the rocket ignites, propelling the fictional astronaut to go higher, faster and farther than any other human has gone before –to the moon. Blast off! At 40!!

Turning 40 could be my lift off,  launching me into a higher self-orbit than ever before.And now I was traveling higher, faster and farther than ever before into new worlds of opportunity into vast new world.  After all: Julius Caesar didn’t take command of his first army until age 41. And Abe Lincoln, Henry Ford and Albert Einstein achieved their greatest success after they turned 40.

For you romantics, consider that at 40, newly married poet Elizabeth Barrett Browning, wrote her famous poem : How do I love thee? And for you baseball  fans, the heroics among 40 year-olds  includes Hank Aaron breaking Babe Ruth’s career home-run hitting record and Ted Williams collecting 7 hits in his last 11 at bats to win the American League batting title.

Turning 40,   I began to better understand what psychologist Abraham Maslow meant when he said as you get older everything “gets doubly precious and piercingly more important.” I took nothing for granted.  Everything I did seemed so much more significant.

Turning  40, I turned off the cruise control in my life and turned on the lights in my life even brighter with a heightened awareness.   Even smelling flowers became  a big deal to me. I could  no longer casually look at the proverbial flowers in my life. Their beauty had commandeered my attention, piercing my eyes — STABBED with a new sense of heightened reality, as Maslow notes, energizing me to squeeze more time out of every hour and more meaning out of every encounter.

Blasting off into the second half of my life with a sense of fusion more than confusion, I felt a psychic coming together much like the bones in the hand fuse together as you get older.   I had  awakened to the Jungian declaration of independence:  I am free because I am me.  “He who looks out, dreams. He who looks within, awakens.” And life had become a blast again quite literally.

I can’t claim — as Confucius did on his 40th birthday— that I know all I am. But I am gaining more stability much like a sword’s forte — the strongest part of the blade.

I am forte not forty.  My perspective is broadening, ever-extending like a sword finally unsheathed. Of course my body still aches at times. Sure,  I can feel that I am getting older. And so what if the tape recorder wound into my mind is no longer on fast-forward.  I’ve found the PLAY button.

Wanna play with me?   Let me know how you will –or you have– turned  “forte”.

Reframe an issue to better solve it and keep your leadership skills in mint condition.

1 thought on “Are You Turning Forty or Forte?”