Here’s an idea to enhance your creativity. Reading time: 3:58

Have you ever felt like running away from it all?  Oh, the freedom, the sense of wonder and opportunity over that next horizon! 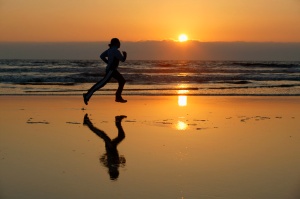 Let’s run away just like that 11-year-old boy did so many years ago. He stowed away on a ship bound for India. But then his dad caught up with him just before the ship headed out to the open sea.

The boy was punished. His mom scolded him: “If you ever run away again, travel only in your imagination.”

Jules Verne listened, the same Jules Verne who would travel most famously ONLY IN HIS IMAGINATION as a renown science fiction author:  Navigating 20,000 Leagues Under The Sea. Embarking on a Journey to the Center of the Earth. And rocketing From The Earth to The Moon for a manned landing on the moon 104 years before Neil Armstrong first took “One small step for man. One giant leap for mankind.”

Ah,  the power -the POWER–of your  imagination. So powerful that Napoleon said imagination rules the world. So powerful that Albert Einstein said: “Imagination is more important than knowledge.”         So powerful that a warrior could only dream of having such awesome might. At least that’s how they praised Thomas Edison during the  dedication of his museum in Menlo Park, NJ. They lauded Edison, the inventor of the light bulb and 1200 other patents, with this inscription:

He has led no armies into battles.
He has conquered no countries.
He has enslaved no peoples
Yet he wields a power
The magnitude of which
No warrior ever dreamed.

Even as a kid, I was too practical to believe in the tooth fairy. I even had my doubts about Santa. I figured you needed fairy dust or at least a magic wand to stir your imagination. Then in my teen years — when I KNEW  everything –I became even more skeptical.

C’mon take off the  rose-colored glasses,  I chided.

Oh, sure I could see how an imaginative poet like William Blake could put on his rose-colored glasses and see a “world in a grain of sand”  and a “heaven in a wild flower” and “hold infinity in the palm of your hand.”

But not real people solving real problems in a real world.  But then, finally, I found the key to my imagination. Maybe it’s the key to your imagination too.

Crossing the Borders
of your Mind

Forget the rose-colored glasses. Don a pair of walking shoes, hiking boots, tennis shoes, golf shoes etc. and get out of your office/workplace. To find my imagination I’ve had to physically get out and look for it, much like traveling to another nation — the imagiNATION.

Remember the scene in the movie Miracle on 34th Street where Santa is trying to define the Christmas spirit in general and Santa Claus in particular to a very skeptical  five-year-old girl?  He says:  “Now you’ve heard of the French nation. The British nation. Well, this is the imagiNATION.  It’s a wonderful place.”

To get to my ImagiNATION, I have to cross the borders of my comfort zone and reach out well beyond my knowledge, beyond my  Know Ledge —- beyond what I already KNEW into something NEW.

No matter how I raise the flag on my imagiNATION, I always come back to my work more rejuvenated, more refreshed, more productive. And more ship shape.

Just like that 11 year old boy, sailing the high seas of adventure. Only in his imagiNATION.

Run away into your ImagiNATION to keep your leadership skills in mint condition.

2 thoughts on “Saluting the Flag of Your ImagiNATION”